I normally pick hikes to complete based on the scenic vistas available along the trail. I compare the terrain and exposure to the weather forecast and timing and make a plan for where I want to photograph and when. If planned and executed perfectly, I arrive to the viewpoint at just the right time to take the photo I want and then continue hiking. However, a much more realistic result is that I arrive at the viewpoint early and spend quite a while waiting around for sunset or for clouds to clear. This is because I always plan way more time for the actual hiking than I think I will need. Just like going to the airport two hours early, this usually results in some waiting around but when things don’t go as planned it gives me a buffer so my day isn’t ruined. 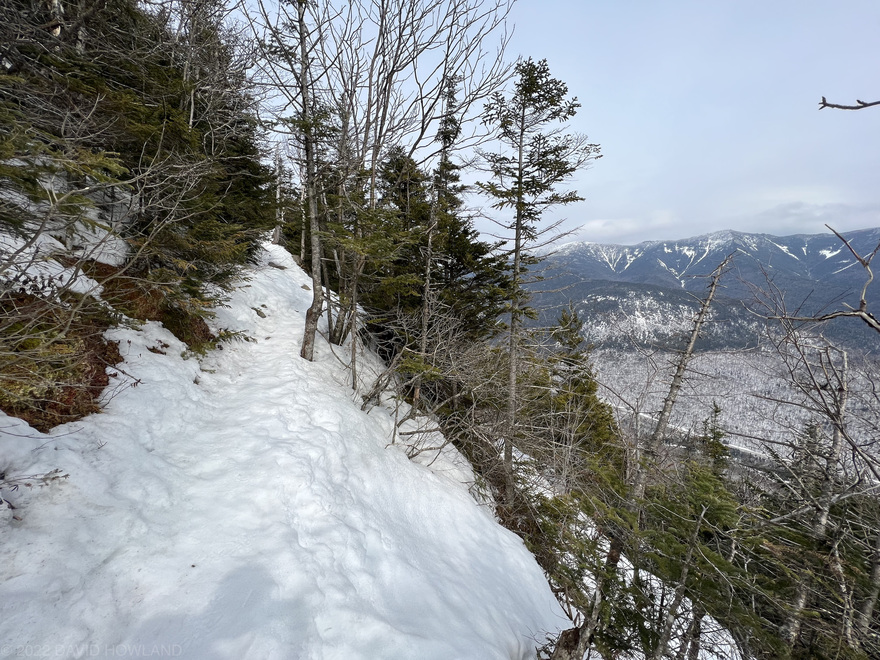 This is precisely what happened on my recent hike up Cannon Mountain in Franconia Notch State Park. I’ve climbed Cannon in the winter many times but I usually ascend on skis via the uphill route at Cannon Mountain Ski Area. This route is a short path to the summit but not especially scenic until you reach the summit tower. On this warm day in March I wanted to climb via the Hi-Cannon trail. This route leaves from Lafayette Place and branches off from the Lonesome Lake trail shortly after the trailhead. It ascends steeply up the southern shoulder of Cannon Mountain with only a few switchbacks thrown in to make things easier. The hiking conditions were perfect on the lower slopes of the mountain: grippy snow cover and warm temperatures. I made great time up to the infamous ladder and switched over to crampons after encountering multiple ice floes blanketing the entire trail. 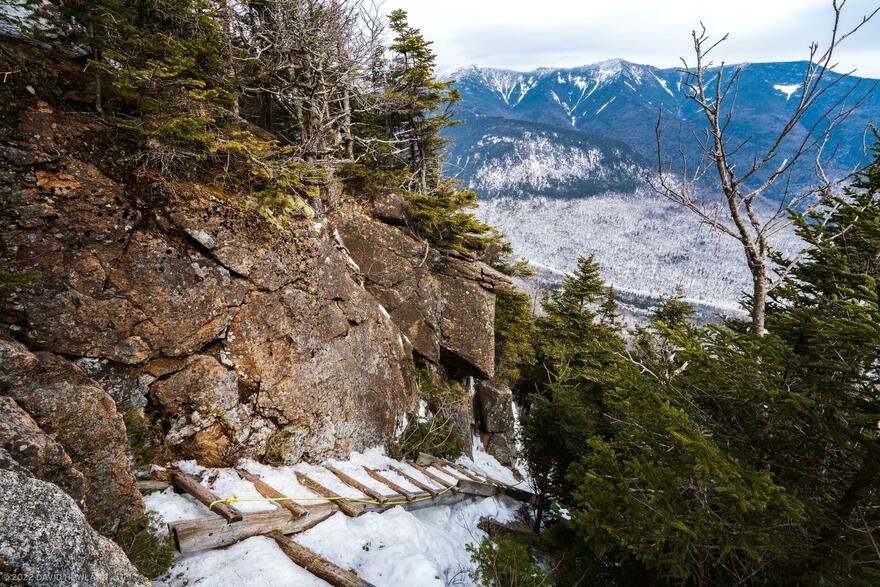 Above the ladder the trail got icier. As the trees got shorter I was exposed to more wind and the day began to feel more like a winter day. As the trail turned north towards the final climb up to the summit, there were several impressive open viewpoints down to Lonesome Lake below me.

I soon reached the intersection with the Kinsman Ridge Trail and climbed to the top of the radio tower at the summit of Cannon Mountain. 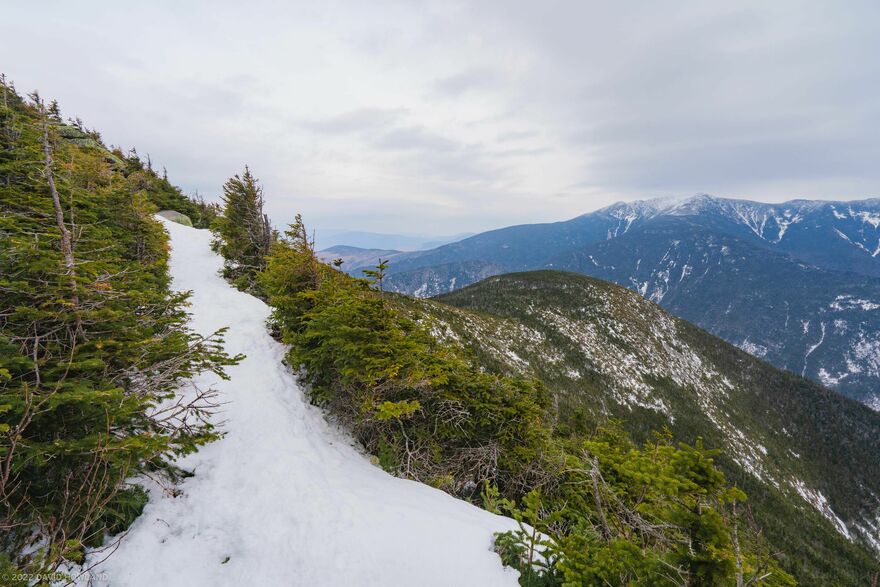 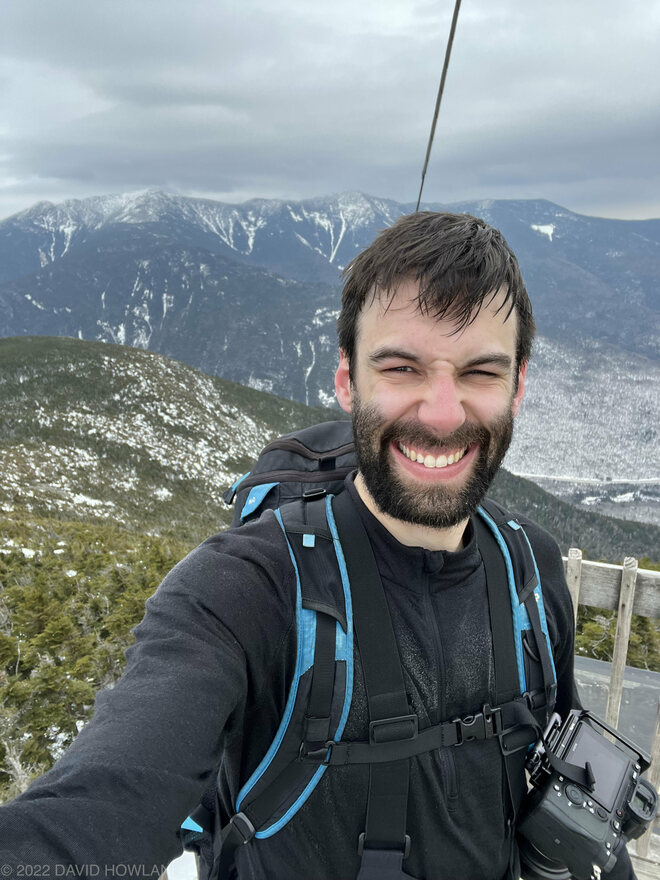 After a quick stop at the summit lodge for a snack, I turned around and descended back down the Kinsman Ridge Trail heading for sunset at Lonesome Lake. The views south down Franconia Notch and across at the peaks of Franconia Ridge were beautiful. 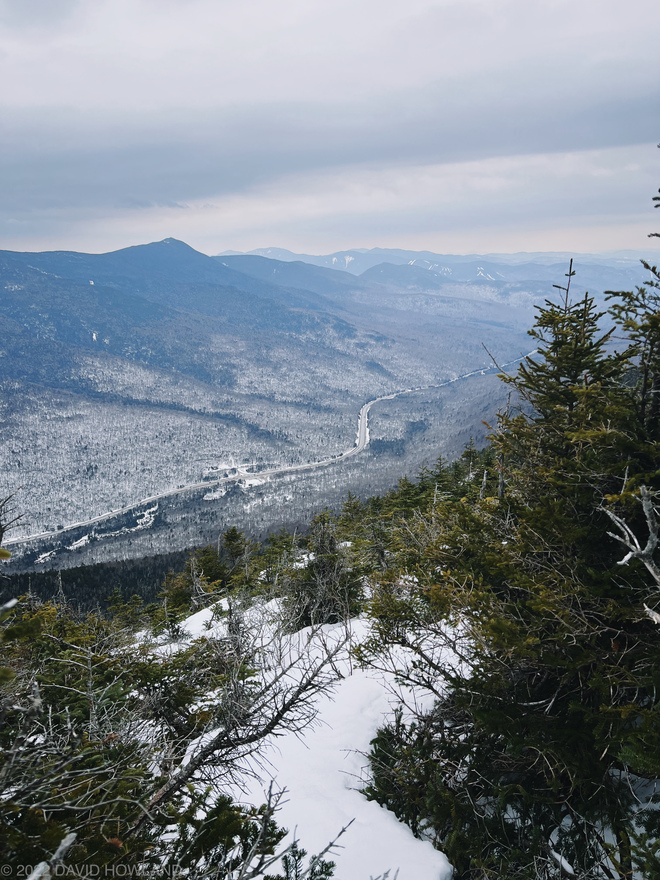 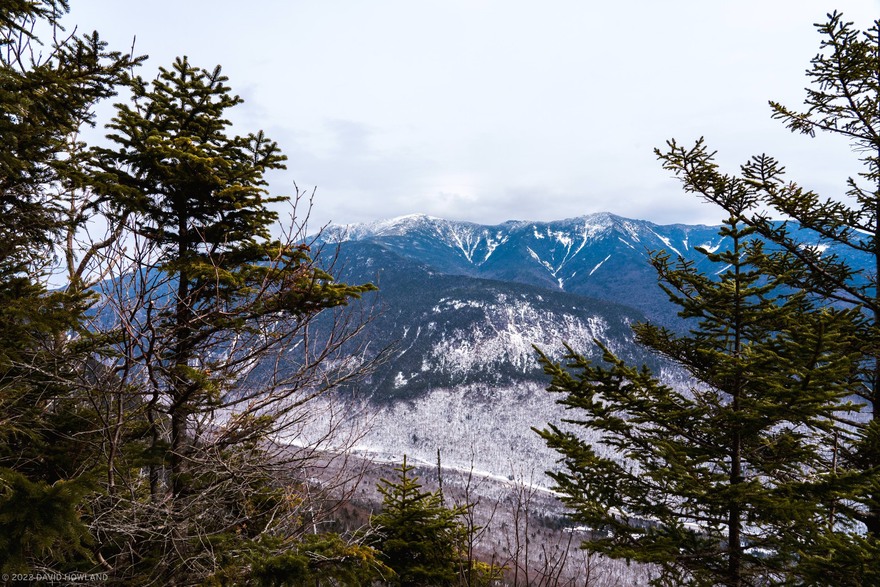 It was at this point that my planned extra time became important. I’d been encountering larger and larger ice floes crossing the trail the higher I climbed. The early part of the week had been warm and rainy but the weather had turned frigid and windy as the week went on. These ice floes were impressive but easy to cross with careful steps and mountaineering crampons. 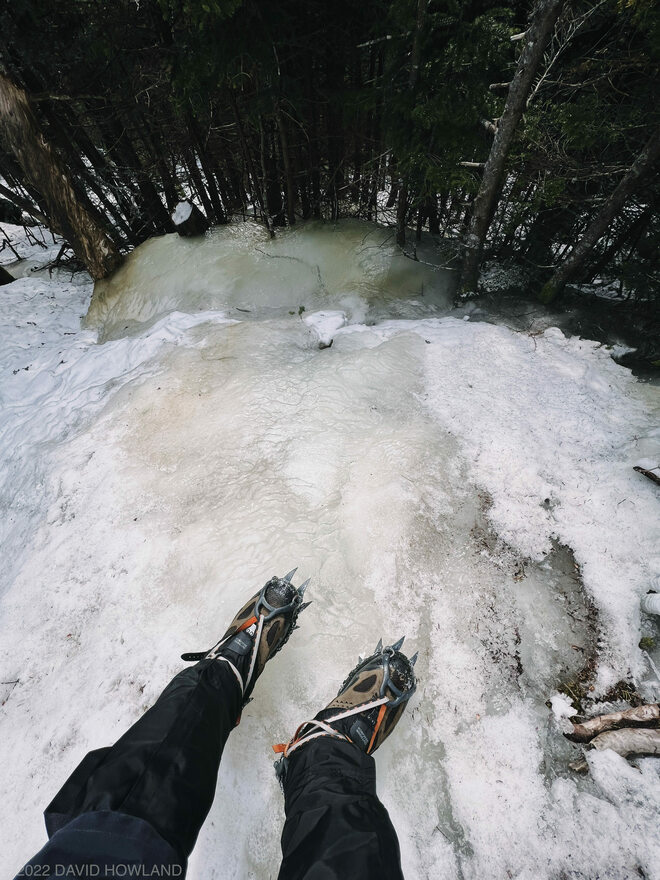 However, the section of the Kinsman Ridge trail descending towards Coppermine Col was incredible. The entire trail looked like a frozen waterfall with huge pillars of ice stretching for twenty to thirty feet across the trail and descending hundreds of feet of elevation. 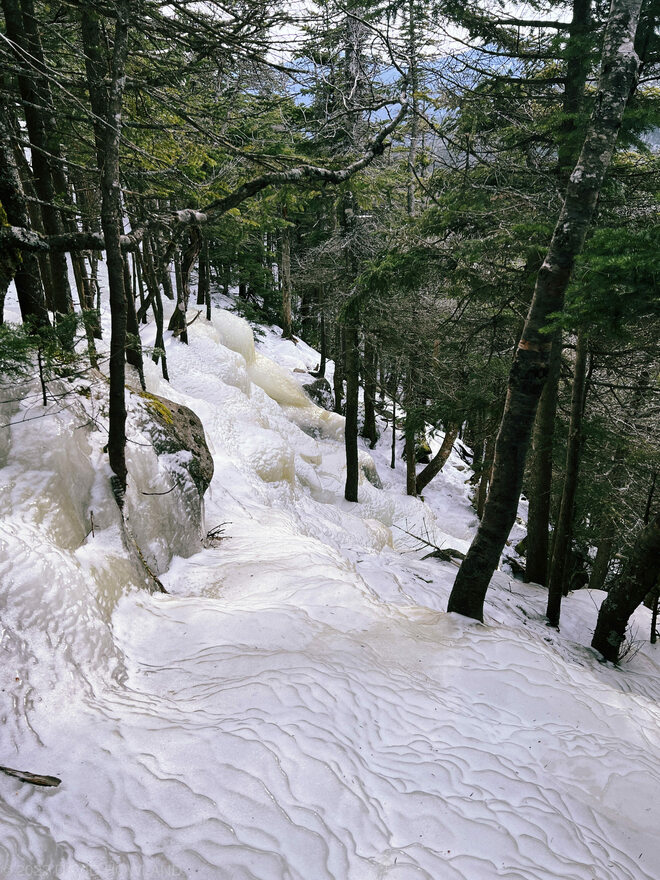 This was the trail! I very slowly picked my way down the trail. The ice was extremely brittle and difficult to set a crampon point or ice axe into. Self arresting a fall would have been difficult. It took me about an hour to traverse a quarter mile of trail that was frozen waterfall after frozen waterfall. Beautiful but dangerous.

As I reached Coppermine Col and the trail flattened out the ice dissappeared and I made good time the rest of the way down to Lonesome Lake. I found a spot on the edge of the frozen lake a ways away from the AMC hut and waited a short time until sunset. 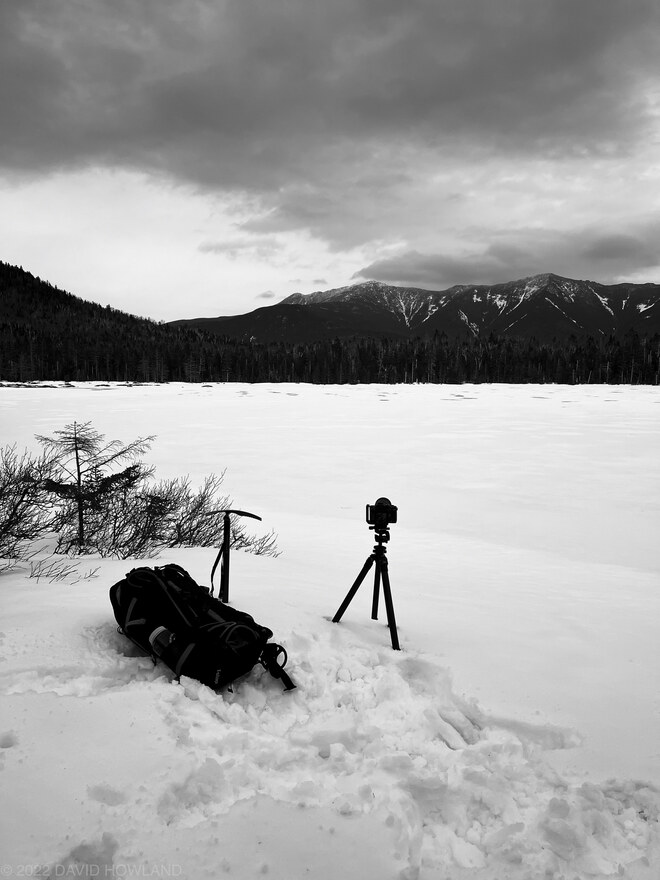 The sunset never quite popped with color but the light on the surrounding mountains was beautiful. Franconia Ridge and the trees across the pond were lit up as the sun dropped behind the Kinsmans. 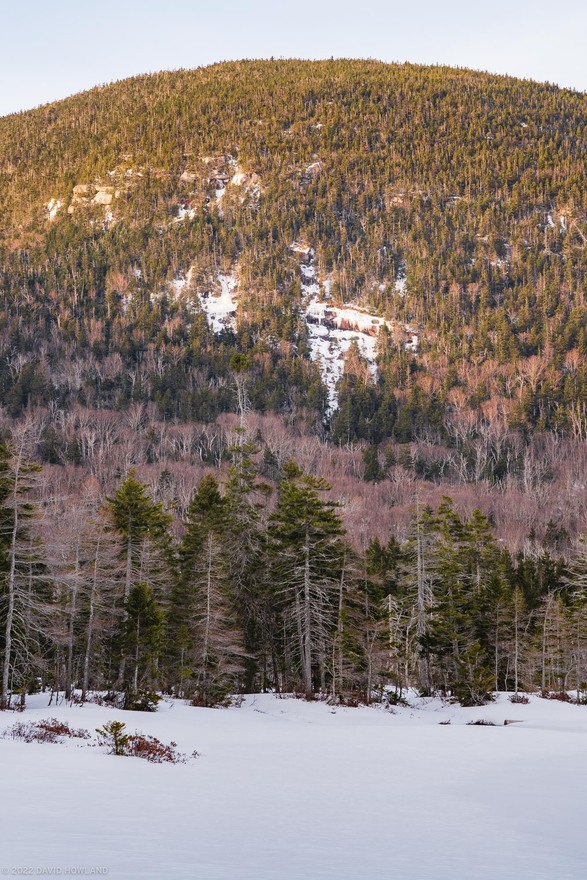 The sunlight caught the patches of snow clinging to the very tops of the ridge and they seemed to catch fire for a few minutes.

Buy a Print of This Image

The sunset light faded quickly and I ended my day descending through the forest at night back to my car.

Fireworks and Stars over Cannon Mountain